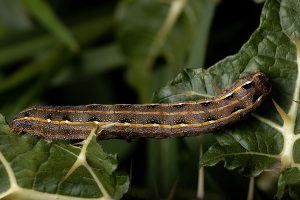 Army worms are called army worms because thousands march from one place to another looking for food. Once they have conquered your landscape or plants, they march on to the next. Reports of heavy infestations state munching can be heard from army worms eating lawns. If you notice a brown patch on your lawn that seems to keep getting bigger by the day, you might be dealing with army worms.

Adult army worms are a pale brown moth with a white spot in the middle of the wing. Young larvae are green, and move in a looping motion. Full-grown larvae are pale green to brown in color, with alternating light and dark stripes running down their body. Once the larvae reach maturity, Army worms can be up to 1½ inches long.

Army worm larvae primary food sources are grains, crops, and grasses. Army worms prefer crops like corn, soybeans, cotton, and peanuts. When these food sources become scarce due to the hot Austin weather, army worms resort to feeding on lawns, and other grassy areas. Army worms are the most active in May and early June. Army worms feed the most at night, and on cloudy days. 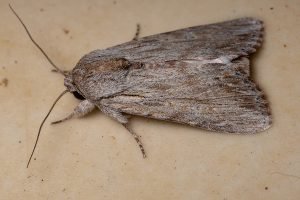 Female army worm moths can lay up to 2,000 eggs on grass blades. The eggs hatch within a couple of days of being laid. Larvae then infest grass within 14 days. Army worms prefer Bermuda, St. Augustine, and Zoysia grasses. If you see what you think are army worms, call a professional as soon as possible. The key to saving your lawn is early detection.

Army worms are difficult to get rid of. The key is to catch them at the early larval stage. If you suspect that you are dealing with army worms on your Austin area property, call the experts at Magic Pest and Lawn. We can help you identify, and eliminate army worms.