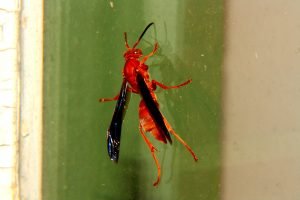 Wasps, unlike bees, are aggressive and predators. There are over 30,000 species of wasps and they are distinguishable from bees by their pointed lower abdomens and narrow “waist,” a petiole, that separates the abdomen from the thorax. They also have little to no hair on their bodies and don’t play much of a role in the pollination of plants.  Their legs are shiny, slender, and shaped like cylinders.

All wasps hunt for their food and build nests for shelter. What exactly they prey on and how they build their nests depends on the type of wasp. There are two general types of wasps: social and solitary. Social wasps build colonies and start from scratch every spring, never nesting in the same spot twice. They design their home out of chewed up wood fibers and their own saliva. The nests may hold up to five thousand wasps and are typically found in protected spaces, like attics, inside of walls, or under decks. Social wasps eat many different types of things including fruits, plants, human food, and other insects (flies, bee larva, caterpillars, etc.)

It’s during the late summer when wasps begin to get aggressive. This is since the worker wasps’ job is done for the year and they’re, literally, waiting to die. After taking care of the queen and feeding the new generation of worker wasps, the old ones are now useless. They become disoriented and begin to venture away from the nest, in search of food and something sweet.

Hornets are a species of wasps. Hornets differ from other wasps in that their stings are more venomous (they contain more acetylcholine); they tend to attack for food as a colony, and their nests are all aerial. Like other social wasps, hornets build communal nests by chewing wood to make a papery pulp. Each nest has one queen, who lays eggs and is attended by workers who, while genetically female, cannot lay fertile eggs. Most species make exposed nests in trees and shrubs, but some hornets build their nests underground or in other cavities.

Hornets have stings used to kill prey and defend hives and are more painful to humans than typical wasp stings because hornet venom contains a large amount of acetylcholine. Individual hornets can sting repeatedly; unlike honeybees, hornets do not die after stinging because their stingers are very finely barbed and can easily be withdrawn and so are not pulled out of their bodies when disengaging. Hornets can mobilize the entire nest to sting in defense, which is highly dangerous to humans and other animals.

Adult hornets and their relatives feed themselves with nectar and sugar-rich plant foods. Thus, they can often be found feeding on the sap of oak trees, rotting sweet fruits, honey and any sugar-containing foodstuffs. Hornets frequently fly into orchards to feed on overripe fruit. Hornets tend to gnaw a hole into fruit to become totally immersed into its pulp. A person who accidentally plucks a fruit with a feeding hornet can be attacked by the disturbed insect. 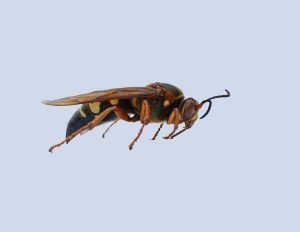 Cicada killer or the cicada hawk, is a large digger wasp species. Cicada killers are large, solitary wasps. They are so named because they hunt cicadas and provision their nests with them. Cicada killers exert a measure of natural control on cicada populations and thus may directly benefit the deciduous trees upon which their cicada prey feed. cicada-killer wasps are large, 0.6 to 2.0 in long, robust wasps with hairy, reddish and black areas on the thorax, and are black to reddish brown marked with light yellow stripes on the abdominal segments. Cicada Killers look like giant honeybees except for they do not sting, they prey on bad insects, flower nectar and other plant sap.

Adults emerge in summer, typically beginning around late June or early July and die off in September or October. They are present in a given area for 60 to 75 days, usually until mid-September. This ground-burrowing wasp may be found in well-drained, sandy soils to loosen clay in bare or grass-covered banks, berms and hills as well as next to raised sidewalks, driveways and patio slabs. A typical burrow is 10–20 in deep and about 0.59 in wide. The excess soil pushed out of the burrow forms a mound with a trench through it at the burrow entrance. Cicada killers may nest in planters, window boxes, flower beds or under shrubs, ground cover, etc. Nests often are made in the full sun where vegetation is sparse. 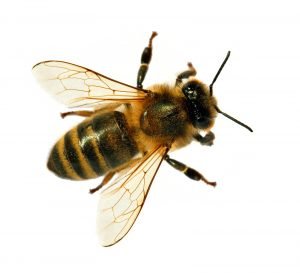 Honeybees are known for construction of perennial, colonial nests from wax, for the large size of their colonies, and for their surplus production and storage of honey. A colony generally contains one queen bee, a fertile female; seasonally up to a few thousand drone bees, or fertile males; and tens of thousands of sterile female worker bees.

All honeybees live in colonies where the workers sting intruders as a form of defense, and alarmed bees release a pheromone that stimulates the attack response in other bees. The different species of honeybees are distinguished from all other bee species by the possession of small barbs on the sting, but these barbs are found only in the worker bees.

The sting and associated venom sac are modified to pull free of the body once lodged, and the sting apparatus has its own musculature and ganglion that allow it to keep delivering venom once detached. The embedded stinger continues to emit additional alarm pheromone after it has torn loose; other defensive workers are thereby attracted to the sting site. The worker dies after the sting becomes lodged and is subsequently torn loose from the bee’s abdomen. 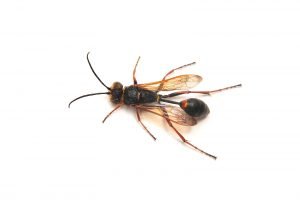 Also known as mud wasp, mud Daubers build their nests out of the mud. Mud daubers are not normally aggressive but can when threatened; stings are still uncommon. Mud Daubers build their mud nests in the shape of an organ pipe or pan flute. Commonly, nests are both vertical or horizontal and are built on the face of walls, cliffs, bridges, overhangs and other structures.

Females build the nests as well as hunt for food. However, male Mud Daubers bring spiders into the nests if they are too close to the nest. Black and yellow Mud Daubers prey on small, colorful spiders such as crab spiders, orb spiders and jumping spiders. Mud Daubers stock their nests with spiders, which serves as food for their offspring. The offspring can survive through winter inside the nest.

If you are having problems with any of these pests on your property, call Magic Pest and Lawn today for the best pest control services in Austin!