Japanese Beetles are a newer species to North America, and are native to, you guessed it, Japan. It was not until the 1900’s that they arrived in the United States via shipping transport. They are now becoming a nuisance in America, causing havoc to crops each year in their short 40-day lifecycle. Japanese Beetles are something that Magic Pest and Lawn exterminators have been seeing more of each year. Magic Pest and Lawn experts can help recognize when you might need professional Japanese Beetle control services, as well as steps you can take for beetle prevention. 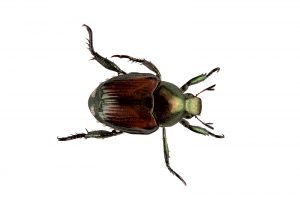 Japanese Beetles are  ½ inch in length and have a unique two-toned coloring. The upper half is an emerald green, and the lower half is a cooper-brown color, with a metallic sheen over the entire beetle. These beetles have noticeable ridges that run the length of the wing coverings. They also have small clusters of white hair that come out of the side of their abdomen.

Japanese Beetles are extremely destructive insects who feed in small groups. They emerge from the soil in June to start feeding on most wild plants. Japanese beetles like to feed especially on plants like roses, daisies, beans, grapes, raspberries, and corn, destroying the plant and crop. These destructive little pests are an annoyance for farmers and gardeners. They chew up the plant or crop, and leave them to rot under their feces. They chew the leaves, leaving behind the skeleton of the leaf vein. Japanese Beetle larvae are found just under the soil’s surface, and cause damage by feeding on the roots of grasses and other plants.

How to get rid of Japanese Beetles

Japanese Beetle control and prevention can be complex, which is why we recommend calling the pest control professionals at Magic Pest and Lawn to provide an effective, safe, and customized approach to get rid of Japanese Beetles. Although these beetles may be pretty to look at and are harmless to humans, they are destructive to your gardens and farms.

Contact the professional pest control and Japanese Beetle experts at Magic Pest and Lawn to help you identify and get rid of Japanese Beetles before they destroy your Austin Garden or Farm.