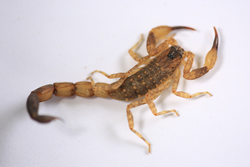 If you have spotted a scorpion in your home or on your property, contact Magic Pest and Lawn’s scorpion control exterminators immediately. Scorpions are predatory arachnids, which means it is imperative to call a professional pest control company to safely get rid of scorpions around your Austin residence. Scorpions are closely related to ticks, mites and spiders, and can be found in a wide range of sizes, from 1/2 of an inch to over 7 inches long. Our pest control staff has found that scorpions are experts at entering homes through even the smallest cracks, so we do our best to cover every nook and cranny of your Austin home.

Scorpions are quite imposing in appearance, and can often be quite frightening when you find a scorpion in your home. Scorpions are arachnids, meaning, they all have eight legs, two pincers and a segmented tail with a stinger. Most often, when a scorpion is seen, the tail will be arched over its back.

Scorpions are nocturnal and will usually hide throughout the day. At night scorpions will become active in order to feed and mate. Throughout the day, scorpions will most often be found beneath rocks, trash cans, fallen limbs and waste piles. These surprising and unexpected locations can make them dangerous to your Austin family, particularly small children or pets.

Scorpions will typically enter buildings when their natural habitat is disturbed, which makes them quite common in new housing developments. When a home is being built, scorpions will begin finding their way into the structure before preventative measures can be taken.

What Do I Do if I Find a Scorpion in My Home?

When a scorpion is found within the home, they most often are found in crawl spaces, wall spaces and attics. When temperatures rise in the summer, scorpions will begin appearing in cooler areas, such as living rooms and bedrooms where air conditioning is prevalent. Magic Pest’s extermination and scorpion control professionals are dedicated to completely getting rid of scorpions in your home, so you can rest easy.

In optimal conditions, scorpions have been shown to survive as long as two years with no food or water sources. With the ability to produce many young with each litter, a seemingly insignificant scorpion infestation can become a real problem very quickly.

Contact Magic Pest and Lawn’s pest control team today to begin dealing with any scorpion problems in your Austin home!