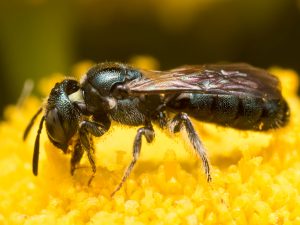 If you see what looks like a bee but is smaller and is either black or green and has a metallic sheen to them, you are most likely dealing with Sweat Bees. Sweat Bees are attracted to the salt in human sweat. They are the most common bee. There are about 1000 species in the United States, Canada, and Central America.

Sweat bees have short tongues that they use to lap up human sweat, which is where they got their name. Sweat bees are smaller than traditional honeybees, at about ½ an inch long. Because of their size, sweat bees may be harder to notice. Males are typically smaller than females. Sweat bees are found in shades of green, blue, and bronze. Some can be a metallic black.

Sweat Bees can be found in large groups, but they are not aggressive. They only sting when their stinger is pressed against the skin. Their sting is the least painful of all stinging insects.

Sweat bees pollinate different types of flowers and plants. They play an important role in  propagating native plants and crops. These plants include pitted fruits like peaches and plums, as well as alfalfa and sunflowers.  Females can carry pollen on the backs of their legs. Male sweat bees cannot.

Eusocial bees live in cells much closer together. In eusocial colonies, the queen burrows underground and carves out cells, then fills each cell with pollen and places an egg inside. These eggs turn into worker bees who are in charge of guarding the colony, and dig additional burrows for the queen to continue to lay eggs.

Sweat bees pose no threat to humans other than being a nuisance during the summer months when they search for sweat to supplement their diets. They can also be a nuisance when they swarm around your house in large numbers.

Sweat bee colonies can be difficult to locate because they are underground and they travel long distances to find crops and flowers to pollinate.

If you have noticed an influx of sweat bees around your home or property, the experts at Magic Pest in Austin can track them down and help you identify them and find a solution.