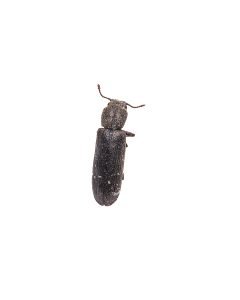 Powderpost Beetles are small beetles about 1/8-3/4 inches long. They reduce wood into a powder. Grub like larvae create tunnels in wood as they feed. The larval and tunneling development both take place below the woods’ surface. Signs of an infestation are powder from the damaged wood and pin holes in its surface. These pin holes are actually exit holes where adult beetles have chewed out of the wood after completing their development. Newly emerged adults’ mate and lay their eggs on or below the surface of bare, unfinished wood. The eggs hatch into tiny larvae that bore into the wood, emerging as adults one to five years later, depending on their species. Adults are active at night. People are more likely to see damage, than see the beetle. Powderpost Beetles are found in various types of wood. 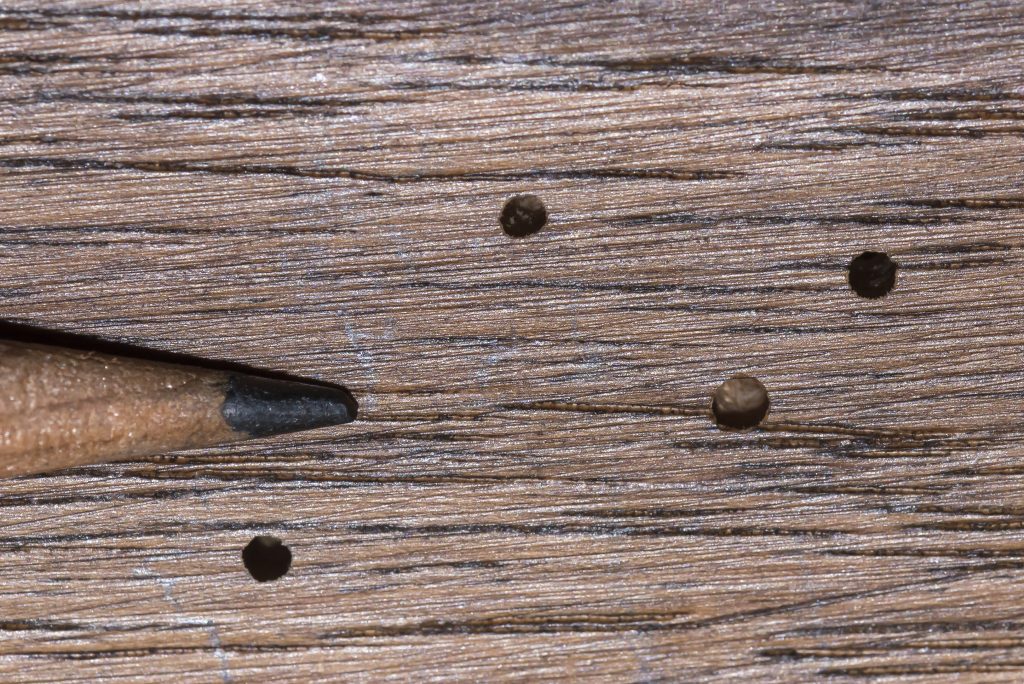 Lyctid Powderpost Beetles are small, 1/16-1/4 inch long. They are narrow and elongated, and reddish-brown to black in color. Lyctid’s exit holes are round and about the size of a pinhead. Lyctid Powderpost Beetles strike wood products only manufactured from hardwood trees such as oak, ash, walnut, hickory, poplar, and cherry. Infestations of Lyctids are associated with flooring, paneling, molding, windows, door frames, and furniture. They do not normally attack structural components like studs, joists, beams, etc. Females locate vulnerable wood to lay eggs after emerging and mating. Females insert 10 to 50 eggs into the tiny pores of the unfinished wood.

Bostrichid Powderpost Beetles vary in size. They range between 1/8-1/4 inches in size and are reddish-brown to black in color. Bostrichid Powderpost Beetles are less narrow bodied. They are flattened and their heads are slanted downward, appearing somewhat hooded. Many Bostrichids also have tiny, roughened, rasp-like lumps behind their heads. Some have a pair of projecting spines at the end of their body.