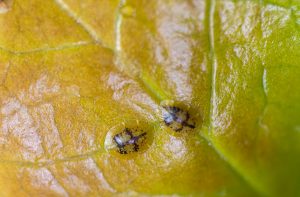 There are over 1000 species of Scale bugs in the United States. Scale Bugs are common pests that are found on backyard trees, ornamental shrubs, greenhouse plants, and houseplants. Scale Bugs are oddly shaped and immobile that often look like shells rather than insects. Heavy infestations build up unnoticed before damage is done on plants. Scale bug infestations can result in poor growth and yellow leaves. If the Scale Bug infestation is not taken care of, the plants can become too weak and can die.

There are two groups of Scale Bugs.

Armored (hard)- Just as it suggests, these scale bugs have a hard exterior that is a protective covering for themselves, but it is not attached to them. Armored scale bugs are about ⅛ inch long. The armored scale bug lives under its armored exterior and does not move around on the plant.

Soft- Soft Scale bugs are about ½ inch long and secrete a waxy film that is part of their body. Their form varies in shape from flat to spherical. They are able, but rarely move around on the plant. Soft Scale bugs produce an ample amount of honeydew.

Female Scale Bugs lay eggs under their protective shelter. The eggs start to hatch within one week to three weeks. Nymphs or crawlers as they are called, find their way out of their shelter and move around the plant they find a suitable place to eat. Young Nymphs use their piercing mouths to feed on the plant. They feed until they gradually develop their hard armor shell and become immobile adults. Male scale bugs grow wings and have the appearance of gnats. Males scale bugs are rarely seen and do not feed on plants. Female scale bugs can reproduce without actually mating. Scale bugs have overlapping generations each year, which is most common in greenhouses.

Scale bugs can be difficult to get rid of because they are very small and hard to see. Since they are hard to see, infestations can happen without being noticed. Disposing of leaves, branches or twigs that are infested with scale bugs can help with controlling the population. Lady bugs are natural predators of scale bugs when they are in the crawler stage.

However, if scale bug infestations are something that is threatening your plants, the experts at Magic Pest and Lawn can help identify Scale bugs and come up with a solution to get rid of Scale bugs once and for all.