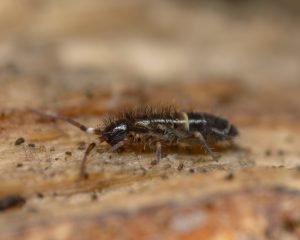 Springtails are considered hexapods because of their internal chewing mechanism and insects have external chewing parts. Springtails are 1/16 of an inch long but much smaller as larvae. They vary in color and can be brown, grey, black, or white. Springtails gather in large clusters that resemble balls or swatches of fabric which can make them noticeable. When they leap into the air, they become more noticeable.

Springtails reproduce quickly and go from egg to adult in as little as four to six weeks. Mature male larvae put sperm into soil. The sperm packets are then picked up by females as they lay their eggs. The eggs hatch within five to ten days.

Larvae will go through stages and spend five to six weeks as larvae. They will molt and become bigger through each stage, before becoming an adult. Springtails can survive through an entire season outside, reproducing a number of times. Springtails that are indoors can survive for up to an entire year.

Springtails cause little damage to plants. They are more of a nuisance pest. Springtails chew the roots in the soil of the plant where they live. Springtails are nearly invisible, but they do not bite or sting humans. They can quickly become an unpleasant house guest because they swarm under carpet and around drains.

The presence of springtails in your home can indicate leaky pipes or roofs, and poorly sealed tubs and sinks, since they favor damp conditions.

Springtails can be a major nuisance around pools because they cover the water’s surface as they die. Because of their tiny size, it can be difficult to skim.

Our Springtail experts at Magic Pest and Lawn can help you identify Springtails and infestations indoor and outdoor. Our experts have years of experience and know exactly what to use to rid your home and yard of Springtail infestations.